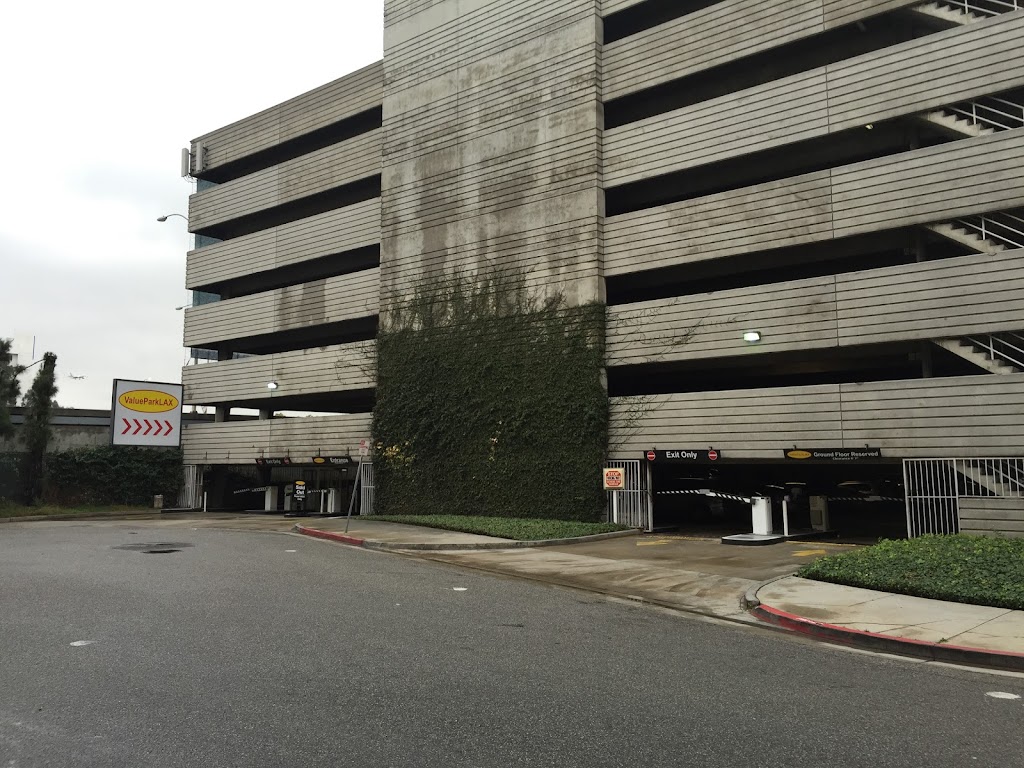 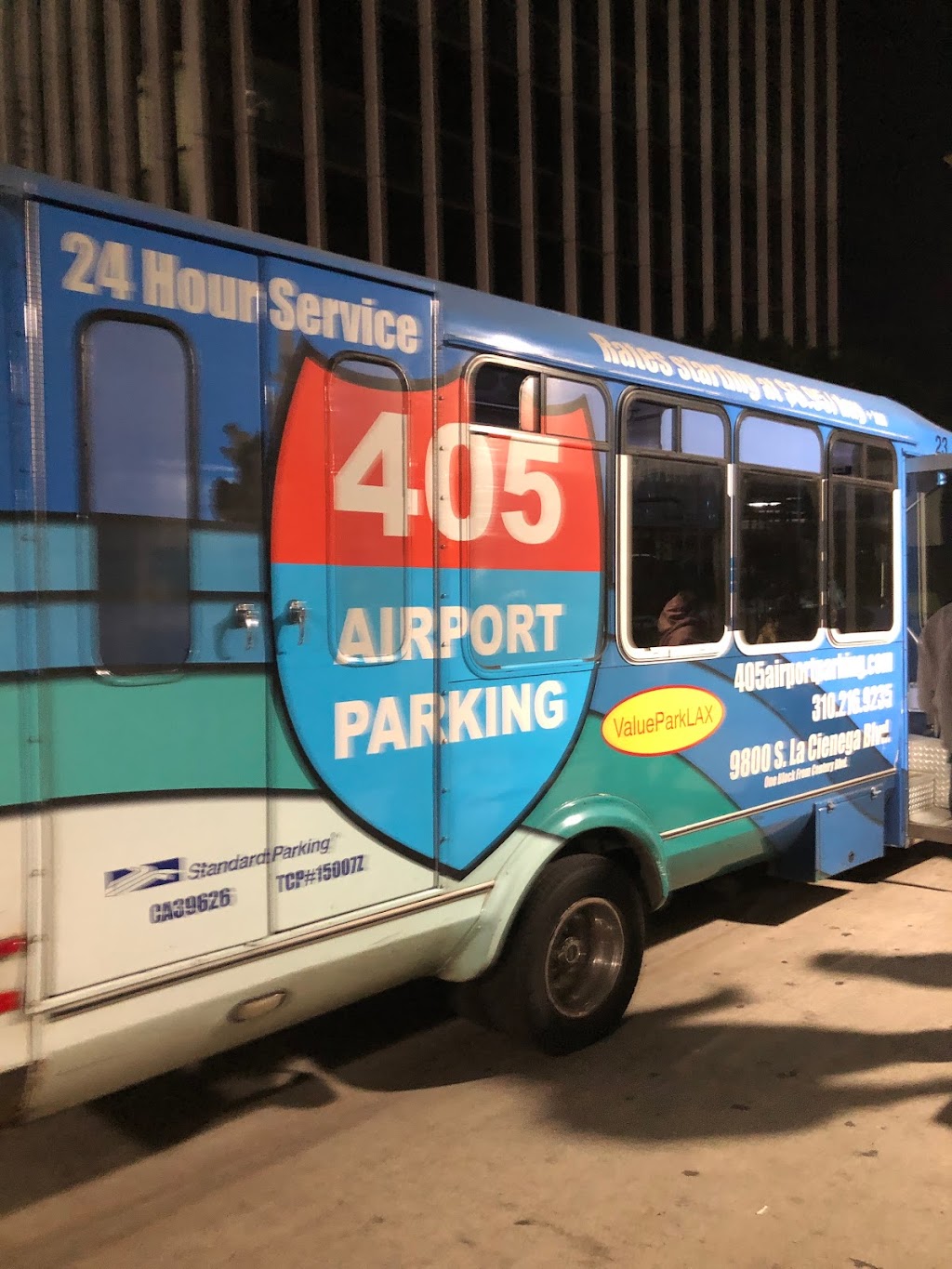 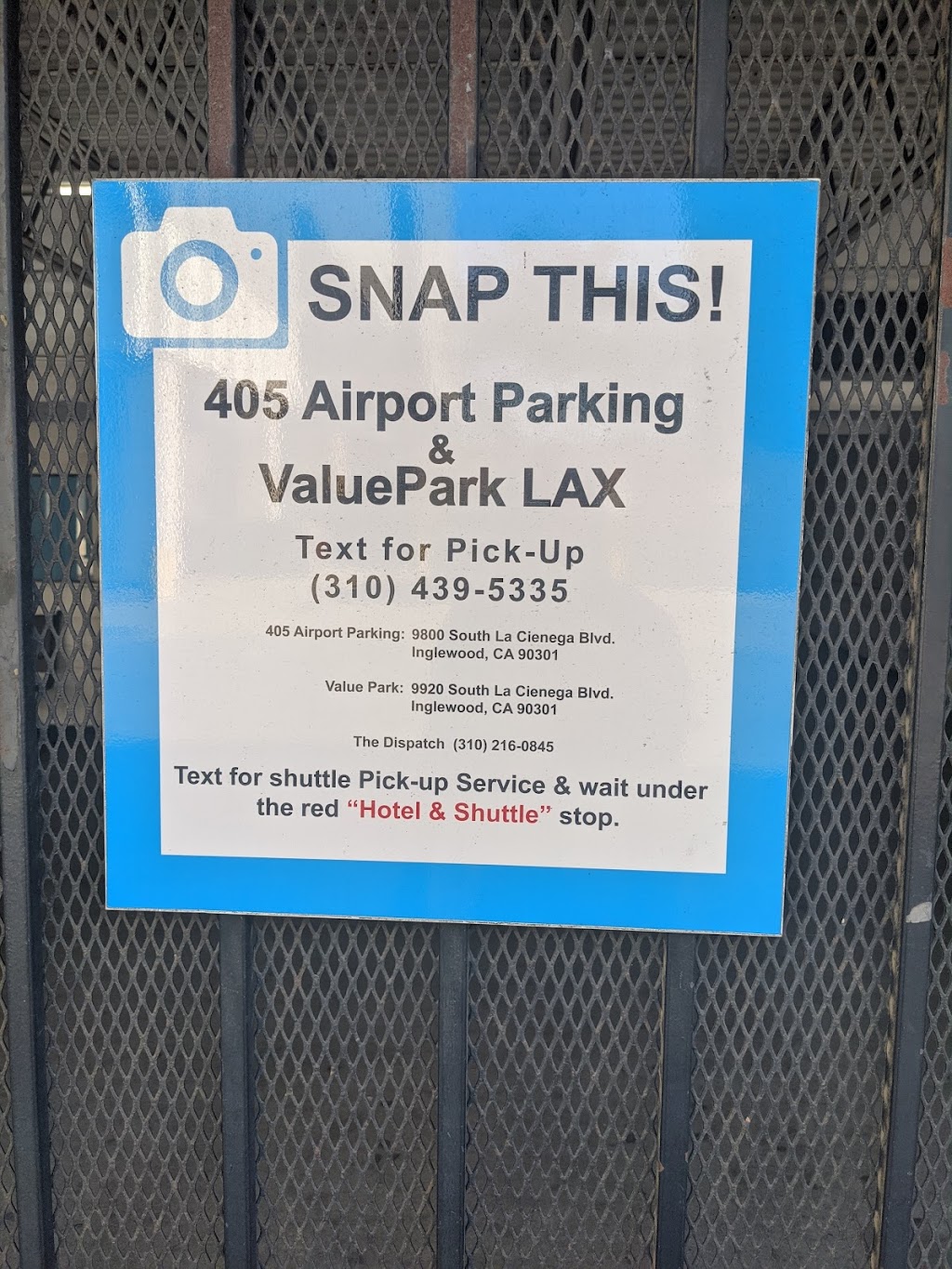 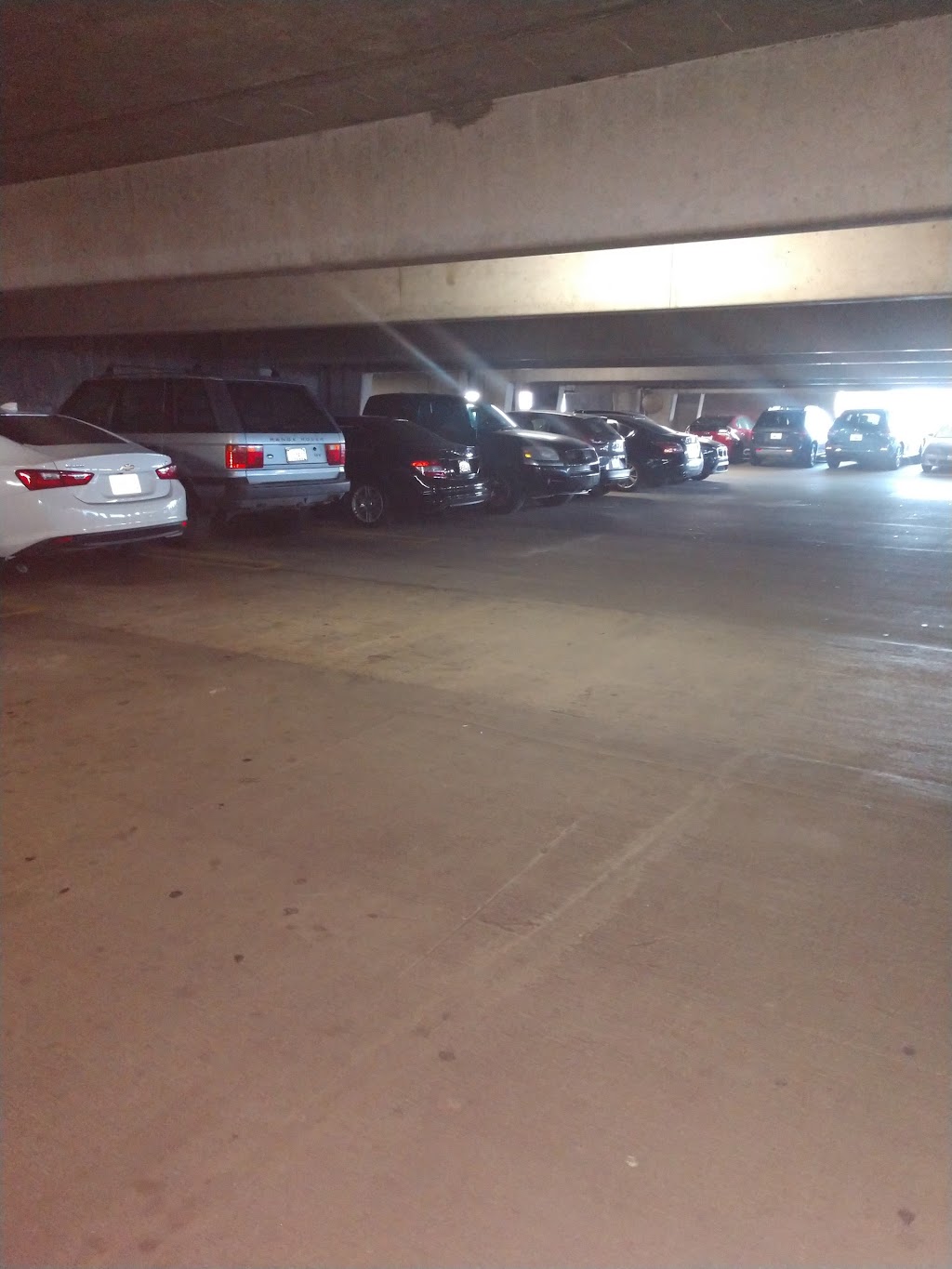 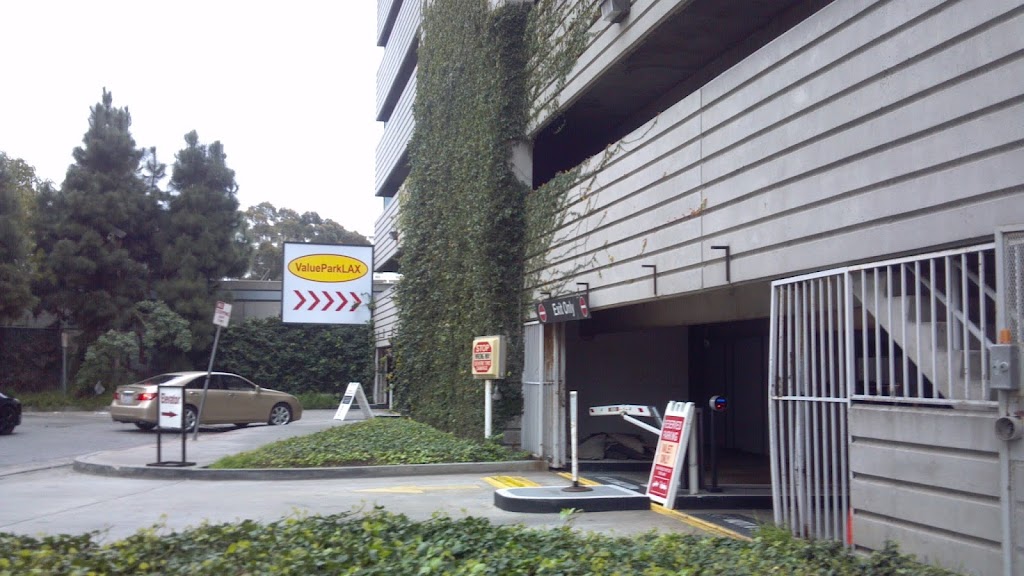 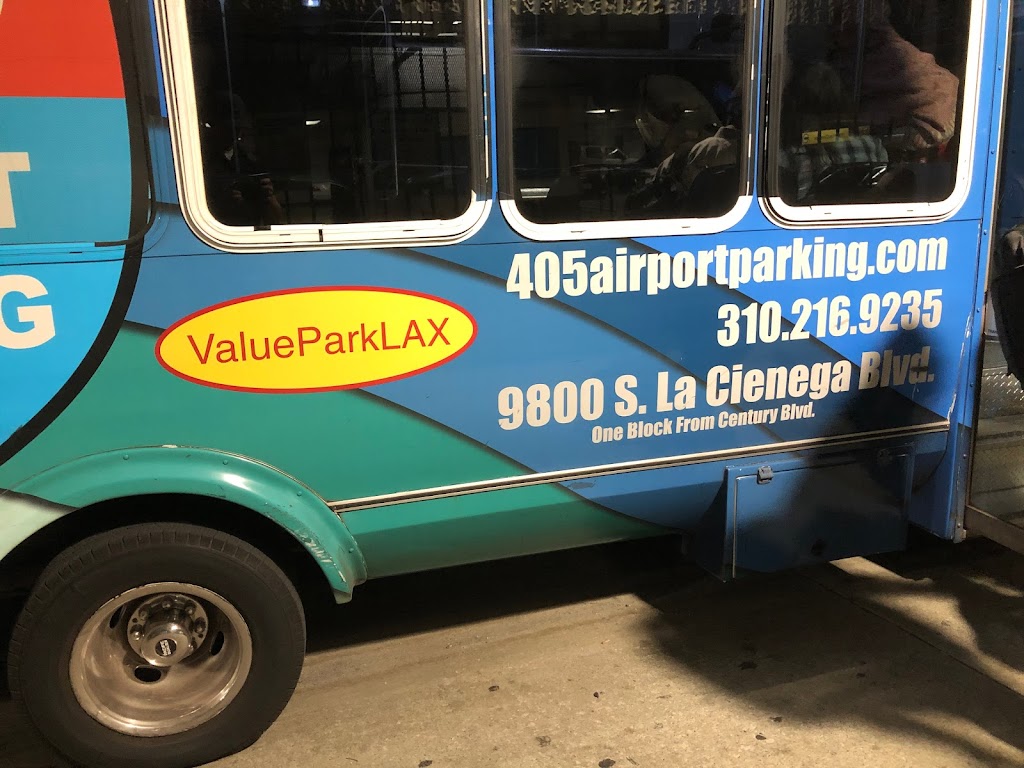 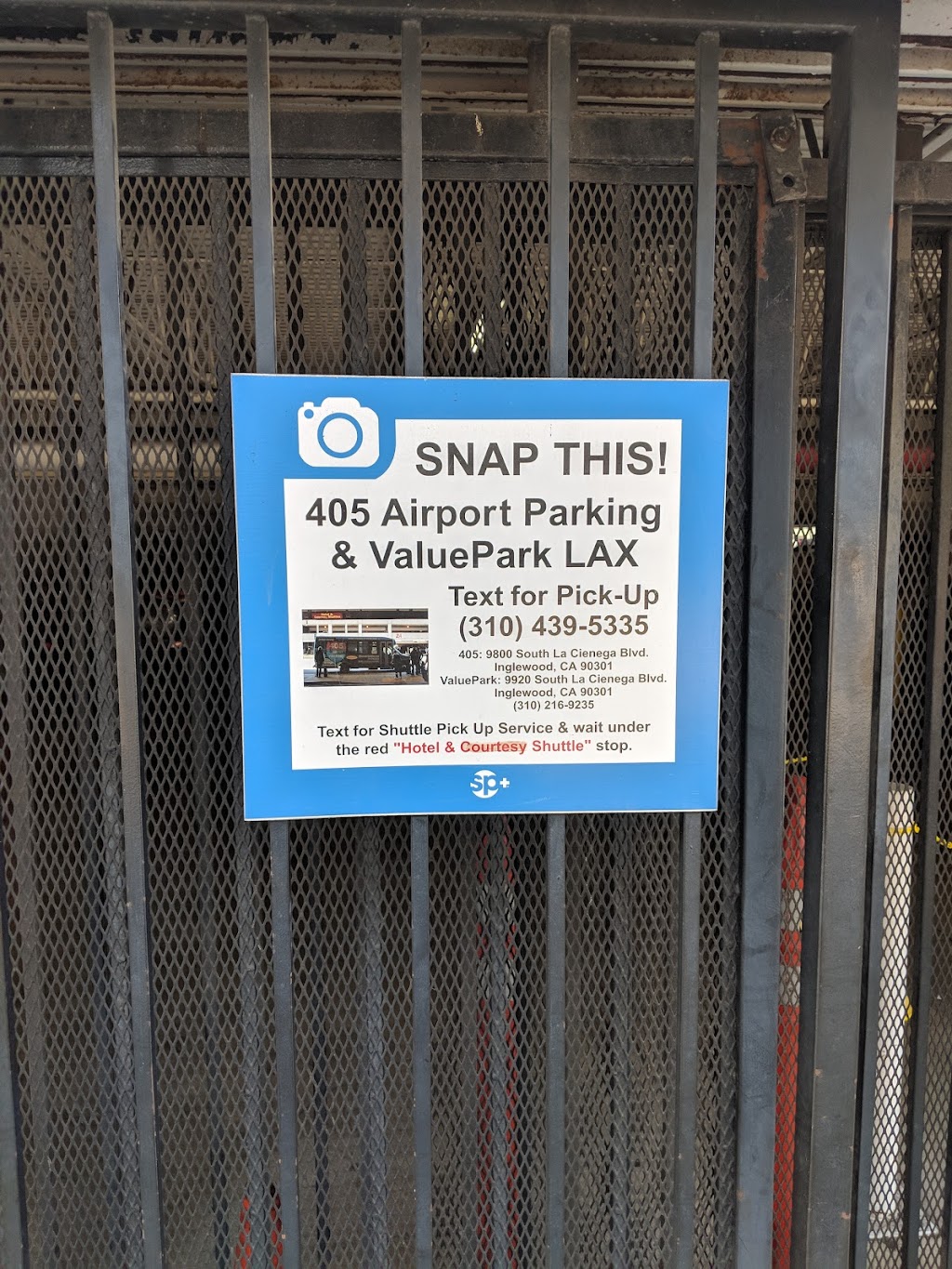 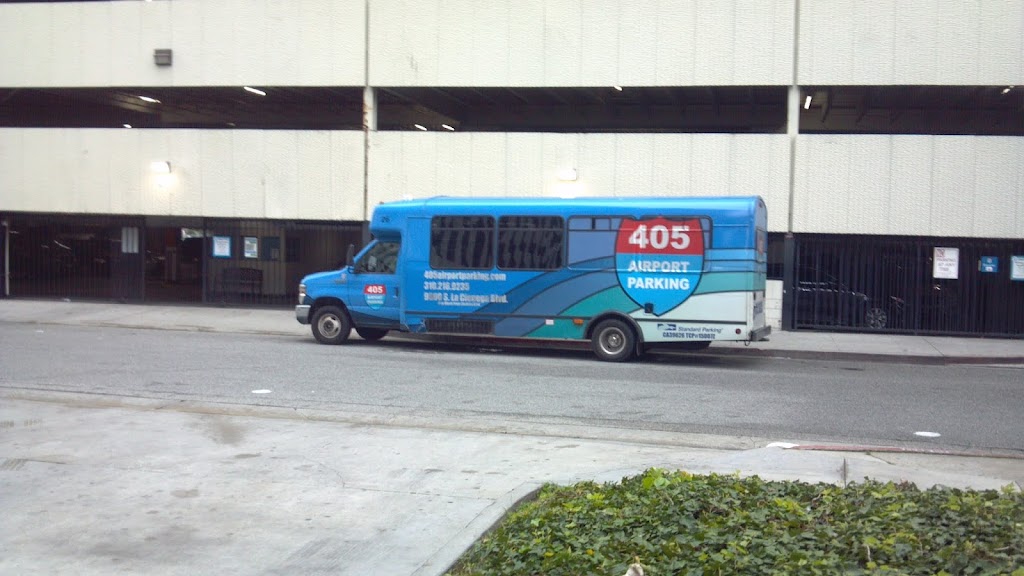 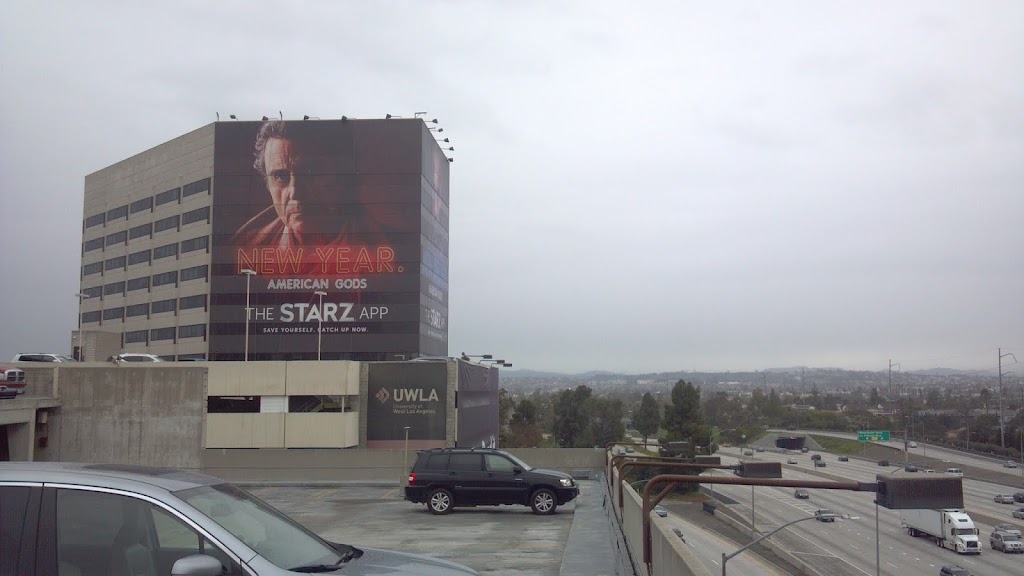 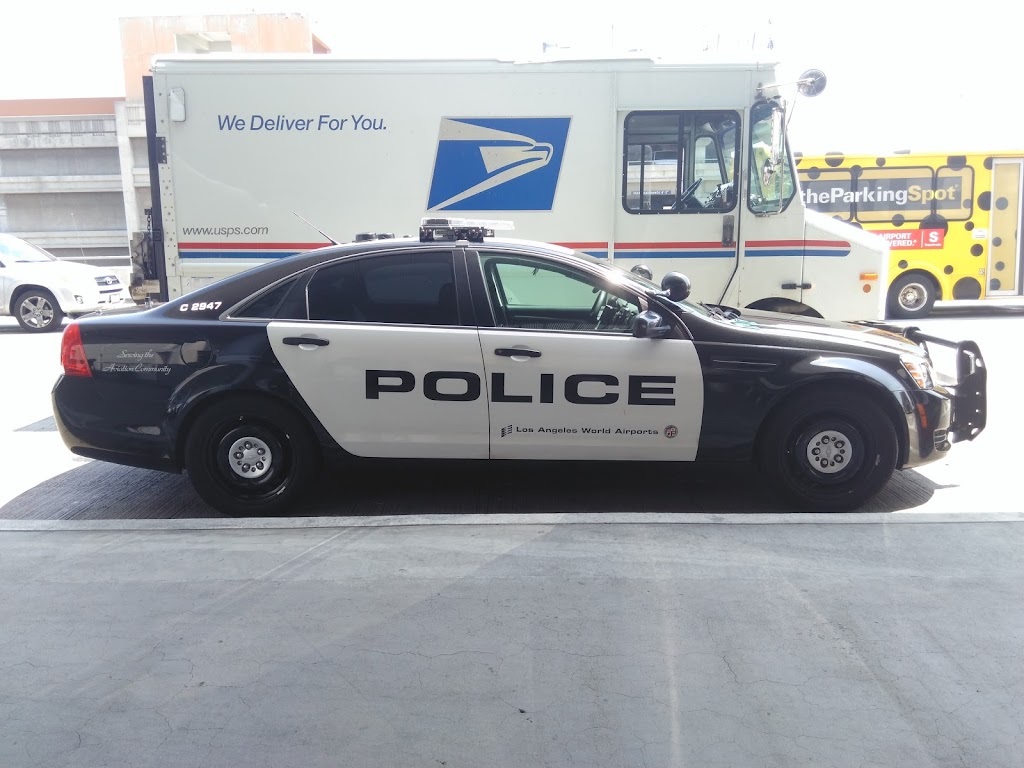 Shuttle let 19 people on in the middle of a pandemic and then drove like a maniac! A complete disregard for our health and safety!!! Then!!! They charged us another $6.00 when we left. I guess you get what you pay for. My life and sanity is worth more than $7.00 per day... NEVER AGAIN! DON’T DO IT!
Ryan White
1 2 3 4 5
Great price. Parking tight. Just long wait for shuttle on return.
Griffith Vertican
1 2 3 4 5
This place is a total scam! Zero stars. I wish I would’ve read the reviews more close ahead of time Because there is definitely a reason they’ve gotten so many one star reviews. For being four hours late they charge you more than a three day reservation — $18.75!

The checkout service is actually pretty hard to use as well. I would avoid this place like a plague if you could.
Devin Rauchwerger
1 2 3 4 5
I have used this group that runs ValuePark LAX and 405 Airport parking for many years, but I will never be using them again. For the record I have maybe left one or two reviews in my life as I typically think doing something like this is a waste of my time, but felt the company should be called out for this type of predatory practice.

I returned from a five day trip on June 16. I paid a total of 29.84 for the entire time (5.97 per day). The flight back was supposed to arrive before 8 p.m. (and my parking was reserved until 8 p.m.), but because of flight delays (given COVID) I arrived a few hours late. I arrived at the parking lot still on the same day at about 11 p.m. I was told that I would have to pay for a full regular rate day of $16.25 (approx). This is in spite of the fact that it was still the same day, the company charges by the day not by the hour, and there is nowhere printed at the facility, on the ticket, on the reservation, or on the website that they will start charging you several dollars for every 20 minutes that you arrive past your reservation, which is apparently what the rule is now. I pointed out, 1. that if I had just put on the reservation that i was getting back at 11:00 p.m. the same day, I would have not been charged anything extra and 2. that I could could go on the website and reserve a spot currently for about 6 dollars, so why should i have to pay $16.25. The attendant refused to let me leave without paying the full amount and refused to call a manager so that I could speak to them about the situation. I also called the facility the following day to speak to a manager. I was told that the managers/supervisors are not currently working at the facility due to COVID but that they would have the manager give me a call. Of course I never received a call.

To the extent that anyone continues using them after reading this, make sure that you set your reservation to end at the latest time possible without incurring the next day fee, regardless of what time your flight is returning, so that you do not come back with a hefty fee at the end like I did.
Vivian Johnson
1 2 3 4 5
Pay more and definitely go elsewhere. Dispatch repeatedly hangs up on you and shuttles take forever
Kathy Aghassy
1 2 3 4 5
Easy to find and park. Because of low travel rate, the parking is at a very good rate. Fast and friendly shuttle.
sabrina culbertson
1 2 3 4 5
Parking spaces are very small and I drive a mustang! The elevators will keep you waiting 10 minutes or more just to get to another floor. This has been the most inconvenient parking location I have ever experienced.
Young Lee
1 2 3 4 5
This place has a great review, don’t understand it why, maybe their prices??? I’ve waited 25min to take their elevator on 4th floor. I missed their airport shuttle which doesn’t even have a set schedule. They told me to walk down. I had two bags. One of the staffs came up after 30min waiting and opened their elevator. Came back to get my car after my trip. The shuttle drivers didn’t help to put my bags up on the bus by the way. I had to walk to the 4th floor since the elevator didn’t work again. I am pretty upset about this place. Very creepy place to park.
Pat Tkagut
1 2 3 4 5
Not sure how this place has such high reviews. Worst experience ever!! Pay more money and park somewhere else!! Waited over an hour for the shuttle to pick us up at the airport! Standing curbside at the airport at 11 at night and didn’t get picked up until past midnight. Tried calling the number multiple times they provided if the shuttle was 30 minutes late. Went straight to voicemail that was full. Tried googling numbers and finally got in touch with someone you could barely understand after multiple attempts and told us to hop on a holiday inn shuttle. Then get to the structure at about 12:30. I get charged an extra $12 because I was late!!!! Although our other car only got charged $6!!! Same exact reservation! Told the parking attendant the shuttle was late or we would’ve been on time and the guy could care less and said it is what it is pay it. DO NOT PARK HERE!!! Shady place! Oh and cars were parked in the fire lanes to where you could barely go around the turns. Horrible place!!!
Travel WtMaya
1 2 3 4 5
I paid for self park but when I went there there was no space at all and they demand the keys so they can double park and I hate to travel and leave my keys with strangers. And I thought that it was that day only so the next time it was the same, and when I complained and others too, the guy said ( If you don't like it just leave) I was already late for my flight so I left it and ran into the shuttle and the driver was rude too. For sure I will not use they again.
Shaya Lowenstein
1 2 3 4 5
Stay as far away as possible from this shady place!!!

This place is NOT worth the low pricing! When I arrived, the only parking that I found was on the 6th floor. Was difficult to drive through because of all the cars parked in the fire lanes. Took about 5 minutes for the elevator to work.

When I got into the shuttle, we drove to the hotel across the street. The driver paged his boss, who said he was 12 minutes out, so we need to wait for him to arrive and then we would make 1 more stop on the way to the airport. I told him that I was upset and this major delay would likely make me miss my flight, so he finally agreed and left after an extra 5 minutes of waiting.

When I got back, the elevator was not working at all. I had to carry my luggage up 6 flights of stairs. I got the the exit and I my prepaid code was not working, so I had to call the number for help. Someone came from across the street and said that I need to pay an extra $8 because I was "late" (I had paid up until the next morning). I had no choice but to pay or he would not let me out.

I told the guy that the elevator was not working and his response was "yeah this is an old structure". I called to speak to the manager and he said I was lying.

Save yourself the headache and park somewhere else.

P.S. It's almost 2 miles from the airport and takes a while to get there even with a decent shuttle.
Elizabeth Roman
1 2 3 4 5
The good: Affordable prices, polite shuttle drive

The bad: Poor customer service (unreachable when contacted, some staff not fluent in English language, etc.)

My vehicle was damaged while under their supervision. Didnt notice it till I arrive to the nearest gas station (parking lot has poor lighting at night time anddamage is on lower part of vehicle). Though they have surveillance cameras, they refused to cooperate with my claim because it was not noticed while in the lot. No morals, no integrity - I do not recommend.
Elizabeth Roman
1 2 3 4 5
The good: Affordable prices, polite shuttle drive

The bad: Poor customer service (unreachable when contacted, some staff not fluent in English language, etc.)

I was charged for days my vehicle was not there (I returned earlier from my trip).

this by far one the worst option to park there. all bad reviews are accurate:

Double parking (so you need to wait for an attendant to move the car in front of you, filthy place, bad attitude staff, shuttle that you wait for for ever, driving in that shuttle makes you feel sick both from the driving and the filthy shuttle. Price is by far the biggest criticism considering the place as you can find much cheaper long term parking such a hotels where is system is faster and pleasant let along the comfy shuttles.

Use this NON ValuePark at your own risk!!!!
Sean Miller
1 2 3 4 5
Great long term parking place. We parked here for 2 weeks in December 2015 during a long trip back east. No issues at all. Shuttle took us to the airport and picked us up when we returned.
Peter Hill
1 2 3 4 5
Super annoying. You have to drive up four levels to actually find the long term parking. Allow 20 minutes to get a park, then 30 for the shuttle. But good value easy to find from the 405, fairly close to the airport and feels like good security.
Eric Norr
1 2 3 4 5
Don't be fooled the cheap price requires a reservation. Driving through the overcrowded lot and parking requires high level driving skills. Upon return we saw competitors shuttles 3 or 4 times before ours arrived.
Ava Buschur
1 2 3 4 5
Waiting for 45 for the shuttle to pick us up and saw no one driving past or anything. We called multiple times without answer and when they did answer they said the shuttle should be on its way. It was not. We waited even longer. It is the cheapest but it made my sister late for her college class.
J Ramir
1 2 3 4 5
Since changing to the app parking at LAX has become more expensive. The parking lots are overly full with many cars being double parked. However, when we returned our car was safe and unharmed.
Colin
1 2 3 4 5
It's the cheapest around which is kind of cool but next time I'll pay for a parking service that has a better shuttle fleet. Waiting for an hour and seeing dozens of the competitors making several passes isn't the kind of experience I want to have after a day of traveling. Because I had to wait an extra hour to get picked up by the shuttle I got stuck in the 405 South closure nightmare and that added an additional hour or so to my long travel day.
Cesar Alvarez
1 2 3 4 5
First nobody at front to detect where to park drove in cars park blocking other cars

ValueParkLAX is unavailable to book on our website. Search for other parking options available at LAX.

ValueParkLAX is unavailable to book on our website. Search for other parking options available at LAX.