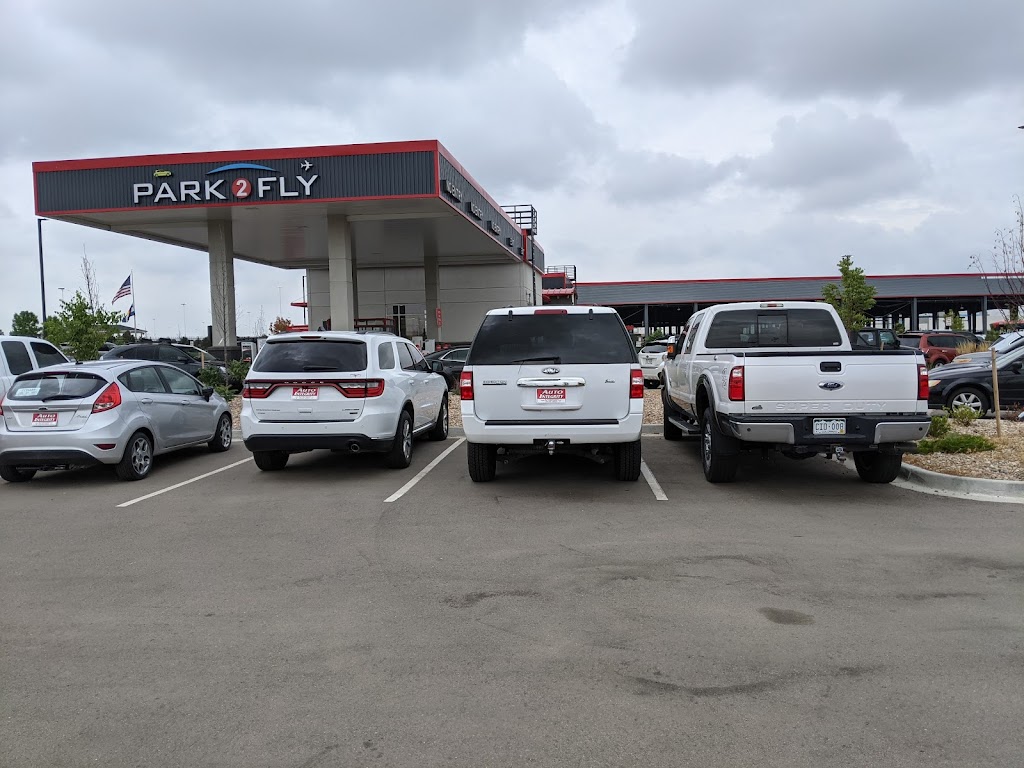 A few minutes from the Denver International Airport (DIA/DEN), Park2Fly Denver is one of the best airport parking options for travellers flying out of Denver. You can access the gated parking by simply scanning your QR code upon arrival.

The facility offers 24/7 reliable shuttle service and includes both outdoor and covered options for parking with accessibility features and luggage assistance.

View All
2.5
Average
1 2 3 4 5
(Based on 158 reviews)
Rosie Thompson
1 2 3 4 5
Parked here for 6 days outdoor parking. Great price. It was my first time using them. Super easy parking, scanned my barcode and then somebody told me which row to go to for parking. The shuttle came as I was pulling my car into the space and the man got out and helped me with my bags onto the bus. They gave me a little card with my parking row and space for return. The card also has details of where to get the shuttle on return. On return I waited maybe 5-10 minutes for the shuttle to get there at 11pm at night I was grateful because I was a lone female traveler. Told them what row I was parking in (only remembered because of the handy card they gave me). Dropped me off at my car. I was with several other passengers both trips with my shuttle and it seemed like everyone got awesome service. Highly recommend!!!!!!!!!!! Thank you.
Mike Goodliff
1 2 3 4 5
No idea why reviews are bad. No problems for me at all. Very easy and both bus drivers were nice, the guy on the way out (Indian guy) was incredibly nice too. This was during the day, no issues at all.
Brandy Perez
1 2 3 4 5
I’ve parked here a few times and each time it has been the same experience. My most recent experience with park 2 fly was the worst. I arrived at the location at 4:45 and didn’t leave until 5:47 and to make matters worse the passengers including myself expressed needing to be on the west terminal and despite our best efforts to get to the correct terminal the driver went to the opposite one which forced most of us to get off and rush to the opposite side of the airport. Not only was that an inconvenience but it caused me to miss my 6:05am flight. Coming back was no different after waiting for 30 minutes I had to call the location to see where the shuttle was and my time in the lot needed to be extended! Overall, the shuttles do not actually run every 10-15 min and customer service is mediocre.
Michele Frey
1 2 3 4 5
We used Park 2 Fly for the first and last time. We had a late flight and it was delayed. When we got our bags and got to the pick up area, every other parking lot had shuttles come by at least once but nobody from Park 2 Fly came. It was 12:35 a.m. We waited and finally tried to call them and nobody answered the phone (we called three times without any luck) Their website says that shuttles come every 8 minutes 24/7. I guess not. Then we finally got a shuttle which we almost missed due to the parking shuttle being worded wrong on the front and on the side. On the side they put masking tape over jet to Park. Now it is 2:30 am when we finally got to the parking lot and the driver asked us for our parking voucher - everyone on the bus said "We never got one". Thank god we remembered where we parked. Then when we were trying to exit the lot, our QR code wouldn't work, so we couldn't leave. The booth attendant asked us for our QR code when I handed him the paperwork I had, he yelled at me that we "owed a lot of money". Then he asked me if I had the paperwork and I said I just handed you it, he then argued with me that this was not the correct paperwork and to give him more paperwork. When I told him that was what we used to enter, again he argued with me to give him more paperwork. I told him that is all that I had and he wanted something more. He finally YELLED at me - fine just leave and opened the gate. We won't be parking here again.
Peter B
1 2 3 4 5
Positives and negatives with this place. If you prepay, entry is very easy. They pick you up from your parking spot which is wonderful. The covered lot has very good coverage. Getting to the airport is fairly quick.

On arriving back at the airport neither of the two shuttles had room for me. They run about 10 minutes apart. That means I’ve waited roughly 30 mins to get picked up and an additional 10 to get back to the lot. Aside from wanting to get home the big issue arises around exiting the lot on time. Meaning your prepaid parking has an exit time. The extra unanticipated 30 mins means you could run past your time. Luckily I had an hour and a half extra to play with but between baggage claim and the shuttle issues I’m going to be cutting it close.

If you park here give yourself time.
Benji Goodrich
1 2 3 4 5
First time and last time. Only available spots were in the dirt, grass and mud. Suitcases got muddy getting to the shuttle which did not come to us. Shoes were caked with mud too. After coming back to DIA we (6 of us in my family) had to wait almost an hour to get picked up. Even though I called multiple times.. And getting to an operator required waiting through instructions each time. Once I had to leave a voicemail. Two shuttles that eventually came were too full. So after calling once again an empty shuttle came straight to us. But only after waiting another 15 minutes.

We did get dropped off by our vehicle, one row over. And we almost couldn't even get out because of other cars parked and blocking the exit to our row. I chose Park2Fly because it was a little cheaper. Won't make that mistake ever again.

I'll likely use The Parking Spot. Lost track of how many of their shuttles went by while waited for just one.
Shannon Davis
1 2 3 4 5
Great prices and customer service! When I got there, I didn’t have my code to scan as it went to junk and got deleted. They printed me up a new one.
Jen B
1 2 3 4 5
What a rip off. No posted rates. I paid just shy of 14/day for outdoor parking (uncovered). That x 4 days. Yikes. All because the lot I normally go to was full.

When I parked I had to walk all the way through the main building and wait for the bus. That bus came in probably 5-6 min. We get dropped off on the same level as passenger pickup not the airline we were on.

On the return I waited probably 25+ min. And that guy did drop me right by my car.

THE ONLY WAY YOU GET THE GOOD RATES IS IF YOU HAVE A RESERVATION!!! Otherwise you might as well park directly at DIA.
Becky Hanlin
1 2 3 4 5
We used Park 2 Fly for the first and last time. We had a late flight and it was delayed. When we got our bags and got to the pick up area, every other parking lot had shuttles come by at least once but nobody from Park 2 Fly came. It was 2:45 a.m. We waited and finally called them and he said it would be 20 minutes. Their website says that shuttles come every 8 minutes 24/7. I guess not. Then we had to call again to see if the shuttle was really coming to get us. The driver was very nice and loaded all of our luggage for us. But then when we were trying to exit the lot, our QR code wouldn't work, so we couldn't leave. There was nobody in the booth. We called but since nobody was in the booth there was nobody to answer the phone. He finally showed up and said the code didn't work because we were past the time that we had reserved the spot for. We were late because our flight was delayed. Why not just make it an option to pay the extra fee at a kiosk. Or better yet, have someone in the booth. And have shuttles pick up as promised. We won't be parking here again.
Timothy Glaves
1 2 3 4 5
I used this facility on my recent trip to SLC. When we returned, I found I was unable to get into my car because my fob battery had died. The attendant from Africa (I don't know his name) was so helpful in my needs, shuttling be back and forth from my car and setting me up with a rental car and storing my wife's wheelchair. I wanted to give him a tip for his kindness but he refused.
Dustin Bratton
1 2 3 4 5
I don’t know why Park 2 Fly does not have a 5 star review. I have always had a good experience with them. There is normally a shuttle waiting as soon as I park my car. Getting picked up from the airport is pretty consistent as well. Give it a shot and hopefully you’ll have a good experience as well!
Catherine Stodden
1 2 3 4 5
We just recently used Park2Fly and the service was terrible! I normally use the Parking Spot but the prices skyrocketed so we decided to try this place. We got in and parked, waited 30 or more minutes until we decided to start walking to the front. We found a bus pulled over, driver was rude but took us to the airport. From my understanding and from what we saw when we drove in, they tell you the aisle to park and send a bus to pick you up at your spot.. this didn’t happen for us. Won’t park here again.
Brandon Lee
1 2 3 4 5
You better know ahead of time what lot to look for. I chose "Orange lot". Took 5-10 mins of driving around before finding an empty parking spot once inside lot. I wanted to be inside a garage with security cameras but didn't see which way to go to find one, that is if they even offer such a thing. Orange lot was a 100 yard walk from vehicle to enter inside airport. Thankfully my 55 lbs suitcase had wheels!!
Christopher Morris
1 2 3 4 5
Their Groupon was helpful though you need to email them to get everything straightened out. Enjoyed our service though we had to wait 30 minutes to be picked up in the early am (3-4am). But we always budget extra time because that is just how these things go. All the communication and service was great.