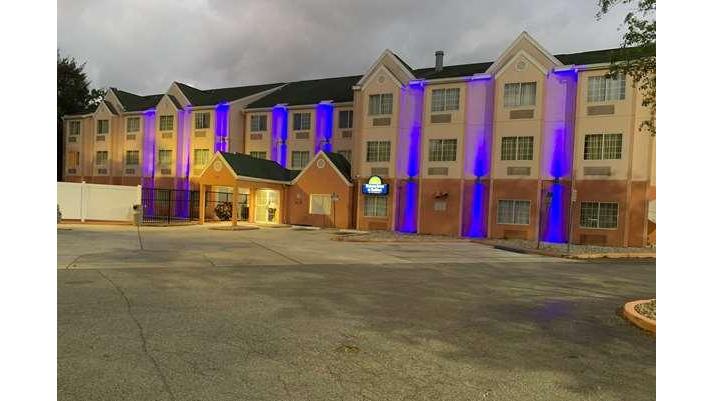 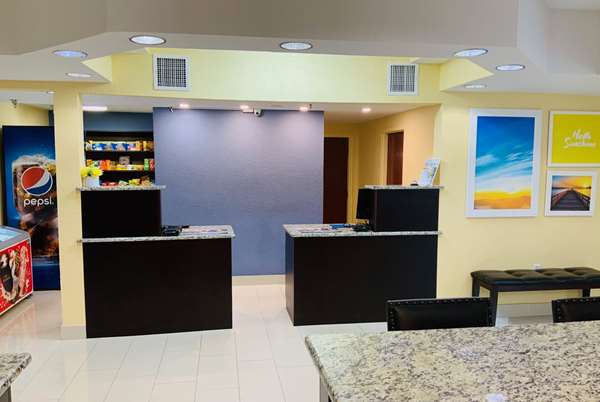 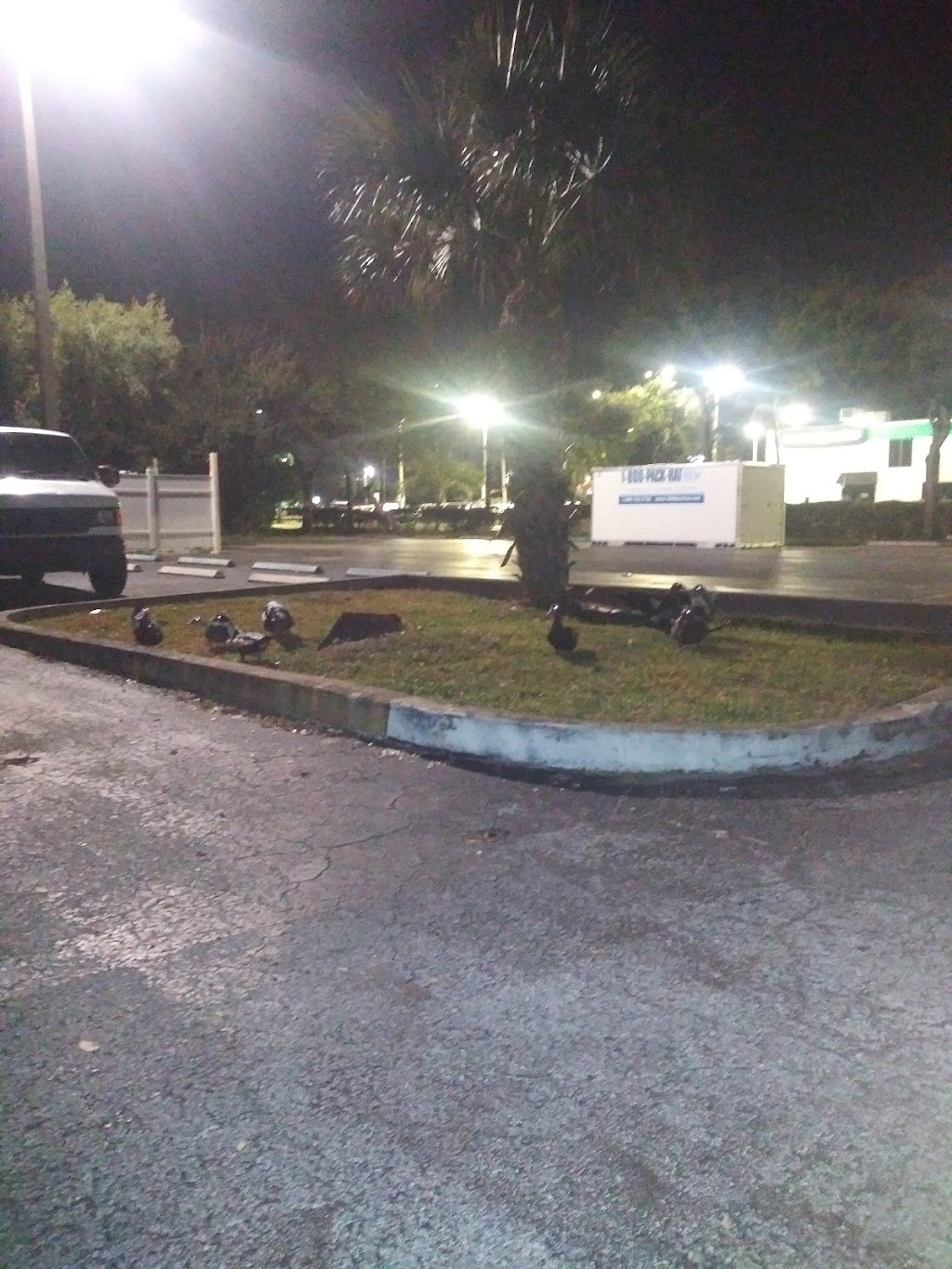 IMPORTANT: Use Rideshare to the Airport (Only around $7 each way)

View All
2.7
Average
1 2 3 4 5
(Based on 131 reviews)
Troy Stafford
1 2 3 4 5
Despite the fact that you here people all night long in and out of their rooms. Pretty ok place if you want to save money but dont care where you stay.
Melissa Sabel
1 2 3 4 5
The positives: the staff was nice and the room was relatively clean and up to date. The bad: The other guests staying at the hotel were extremely sketchy. My boyfriend got propositioned by women and offered drugs on numerous occasions during our 2 week stay. People were heard yelling, partying, and physically fighting at all hours of the day and night. I definitely did not feel safe staying there.
Cracker Jay
1 2 3 4 5
Peaceful quiet room for nice well-kept try and establish great
KC_Playz
1 2 3 4 5
The hotel didnt even put that the pool was closed and there was no continental breakfast the air conditioner was also moldy and the microwave and bathroom fan didnt work.its just a pretty basic hotel if you want somewhere to sleep.but the Beds are comfortable.
Naomi Wolfhard
1 2 3 4 5
This place had roaches and the hallway always smelled like weed. Additionally, you could hear every footstep above you. Tye tv wasnt mounted or on a stand. And the shower had a very leaky faucet, you have to push so hard on the handle to turn it off.
Sadrac Diaz
1 2 3 4 5
Finger nail clippings in the room floor roaches on the wall and pubic hair in the shower. This hotel lacks hygine and presentation. More like a -2 star hotel. This place should be investigated and closed by the health department.
Tricia Thielen
1 2 3 4 5
Only good thing it’s in a decent area close to a lot of restaurants and the interstate. Not the cleanest. Looked out the window to see at least 20 nasty stained beds thrown out. Bedding had stains. Toilet constantly ran. Shower didn’t drain and then found roaches. You get what you pay for.
Angeline Archer
1 2 3 4 5
Really nice middle eastern staff. Really helpful. However...

This is basically a 3rd world roach infested hotel.

Definitely not upto Windham standard
Curtis Croskey jr
1 2 3 4 5
Wasn't even able to stay made reservations month out for our trip was told I was going to get confirmation number by email. I did not receive so called a week later to make sure we were good. We showed up at 1030p to check in for the night and guy was clueless asking if I was sure I didn't make reservations under a different name parking lot maybe had 8 cars in it guy never tried to sell us a room so we left and had to find a room at another hotel at 1045p
Gloria Rodriguez
1 2 3 4 5
Friendly staff, clean and comfortable beds. Housekeeping staff a little to loud. Consider you have guests that have been traveling and need rest.
Pape Wayo
1 2 3 4 5
3 rooms, 1 overnight stay, each equally as bad. While the front desk person Sheila, was an absolute gem, the condition of this place is staggeringly wanting.

First room reeked like skunk weed from someone else in a nearby room smoking in their room.

Second room had a dirty counter with someone else's hair on it sitting in an oily spot, what appeared to be some type of rodent or possibly roach droppings on the counter and night stand. Missing electrical outlet covers, a light fixture which appeared to not have been cleaned since before the hotel was built, Small and large German roaches on the furniture and in the bathroom. The single loudest squeaking bed I've ever encountered in a room, I think it was trying to emulate a kazoo quartet. A kitchen sink that thoughtfully filled your cup and attempted to conserve water by bathing you simultaneously. And as the topping on the cake and indoor overhead waterfall and swimming pool provided by the bathroom AC vent at 6:00 am. Apparently, the swimming pool guy was sleeping well because they couldn't be at my room with a mop until approx 8:00 am.

Room three starts at approx 6:20 am. Where i am greeted by a half made bed and which is followed by the German roaches coming out from the TV and saying hello after I turn it on. The shabbyness is not to be outdone without the Leaning Faucet of Kitchen, which puts the original tower to shame by filling my cup sideways, gangster style...

Oh my... how could you get it wrong so many times??
C P
1 2 3 4 5
Although the rooms are clean, there are people "living" at the motel. The current renovations are the worst I've seen. Something to be expected at a no tell motel. The so called hot breakfast consists of cold eggs and sausage, quite possibly a health violation as it allows bacteria to breed. Definitely don't eat the food and definitely won't be staying here again!!!! Spent 2 nights here and clientele was definitely shady!!!! Though late check out is offered on website, they only extend it 30 minutes.
Henry Lederfeind
1 2 3 4 5
Hot water did not work, rooms are good, but found a little roach... It needs more attention, price is good, location is 15inutes from downtown Tampa and 10 from airport.
Emma Burns
1 2 3 4 5
Checked in and was given the wrong room at first, I booked a double bed bedroom and was given a one bed, so went back to get that fixed. Then in the second room there was cockroaches on the bed and running around. Immediately left and was told I would the front desk would talk to the manager and I would be refunded. Called the next day asking about it and was told yet again they’d talk to the manager. Still nothing all day, called again and asked to speak to a manager and was told they were unavailable and would get back to me. Do not recommend staying here AT ALL.
alicia zelada
1 2 3 4 5
We stayed 5 days in this hotel very nice very clean people very friendly absolutely coming back
Aaron S
1 2 3 4 5
I stayed at this hotel 11/15-11/18, it is Arab/Middle Eastern owned. With that said, before you choose to stay here, read the other reviews first, please.

-baby roaches inside the a/c unit on multiple occasions

-broken bathroom door that you literally had to use 2 hands to force close and open.

-Shower water DID NOT get hot. Enjoy your lukewarm shower!

-Elevator broke down more than once. When I was checking out, a family got stuck in the elevator for who knows how long and began arguing with staff (rightfully so).

Wouldn't recommend this place and I personally would never stay there again. Pay the extra $20-40+ more and get a nicer place.
Natasha ThaRasta
1 2 3 4 5
Terrible needs an upgrade! They had exceptional hospitality last minute booking for me but they certainly need to update their hotel stay was very very short.
kenny voorhees
1 2 3 4 5
It was quiet and clean. It has a small pool. It's not a four star resort. Keep your expectations reasonable, they will exceed them. I hated the tile floors in the room. Continental breakfast was ok but, the make your own Belgian waffles were delicious. Service was friendly and fast. Close to 2 main roadways. Ample easy parking. Not a disappointing stay.
norman davis
1 2 3 4 5
Disgusting hotel i cant believe wyndham put theyre name on this roaches bedbugs breakfast is never ready and when it is its cold the eggs in the fridge had an iche of slimy liquid around. The bottom of the bowl loud noisy guests mattresses stacked outback old and moldy must have had bedbugs. Do not stay here
Shannon Elizabeth
1 2 3 4 5
Bed bugs found in room. Reported to front desk. Did not seem to care. Simply wrote down in a normal notebook and did not take down any info.
Caroline El
1 2 3 4 5
Nice hotel for the price but the little baby German cockroaches and every room and the floor is so dirty I have to wear socks to even go to the bathroom
Lexi Andress
1 2 3 4 5
I paid $120 dollars for a king bed room and got a queen. The door didn’t shut all the way. The shower was moldy. There were burn marks on the toilet from cigarettes. The bathroom door had graffiti all over and was completely busted up. The towels were dirty. The entire place smelled like cigs even though the hotel is “non smoking” it is NOT worth it at all and I really wish I could’ve gotten my money back
Stan X
1 2 3 4 5
It was horrible, the manager is rude and only thinks about money. They have a mold problem, they let other guests be rude to people as they please and the staff does not do anything about it when you tell them that you want the rude people to be removed from the hotel. The maids are lazy and do not care about the upkeep of the room, they do not change the sheets unless asked and even then you have to force them. The manager barely does his job, if you dont have money you will be kicked out immediately even if you have done nothing but pay on time, if you miss one payment you will be gone. It was so uncomfortable being in that place but I thought that since I had the opportunity to rest my head and the lobby looked sort of well kept that the rooms would be too and the staff would also be very courteous. If anyone from corporate is reading this please shut this place down.