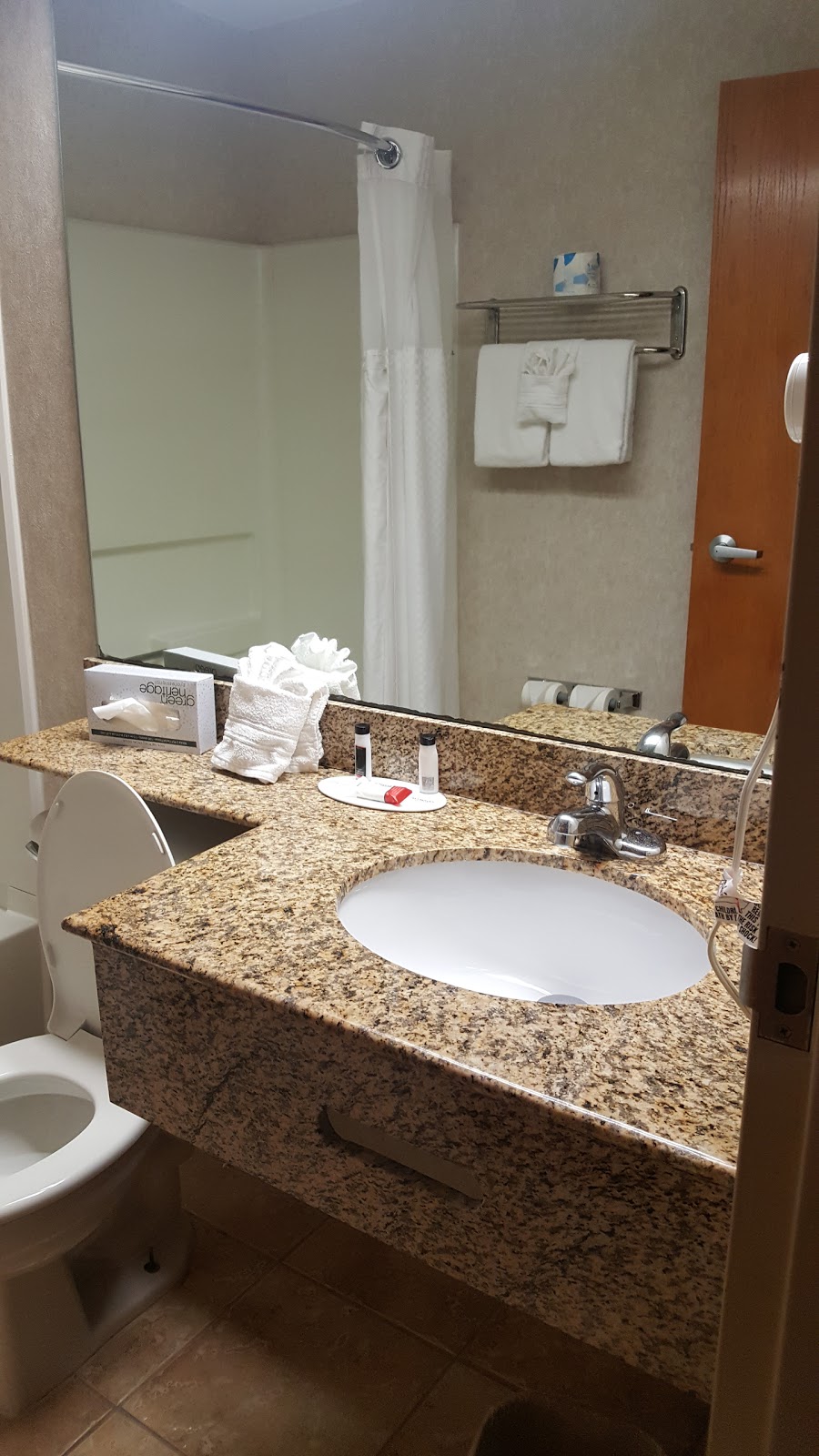 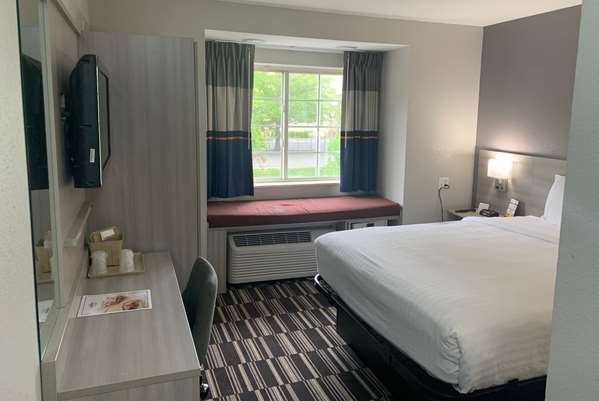 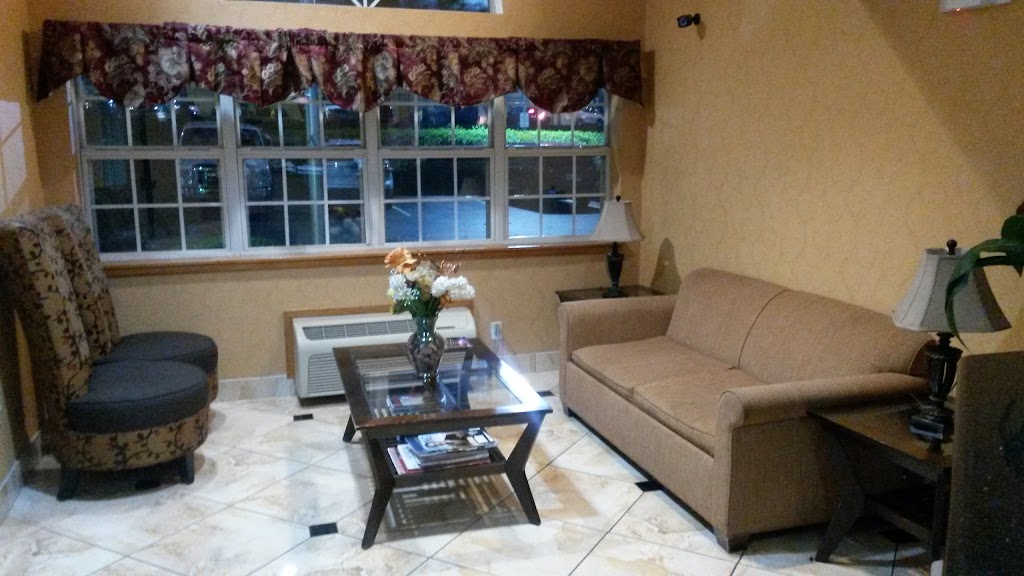 Now I call before I book a room from now on.
Rishabh Joshi
1 2 3 4 5
I stayed for a night in july 2020 and staff were nice and also met a cool person named Jerry. Recommend this place and waffle house is 2 min walk for food. Close to airport
Redesi Bymj
1 2 3 4 5
First of all, I put a room on hold, not yet booked, I didn't apply my travel advisor rate code, nor did I do do once arriving as they could not even find the hold. We booked fresh I figured I'd throw my AAA discount in there. Which was never applied

. There was a $100 deposit which I was unconcerned with but would have appreciated knowing before arriving. There was a bunch of construction going on. And the rooms were small. Yet, $70 for a room? Much better off at the motel 6..and I stand by that firmly. I had gotten a room for 2 notes,
Nicole Williams
1 2 3 4 5
Hotel was hot, had an odor, there wasn't any soaps in the bathroom. I wouldn't stay there again.
Daniel Spivey
1 2 3 4 5
Upon arrival, the person at the front desk was short and rude. I didn't mind them holding the $100 incidental fee, however I did mind being told my reservation was not accurate because I had 4 adults vs 3 on the reservation (extra fee). Our room was on the 3rd floor, upon getting off the elevator was hit with the strong smell of weed. The sliding bathroom door was broken, called the front desk and was moved to another room. As we were moving, the same man who checked us in was telling me how he was "comping" me the room we were moving into because it goes for an extra $5 a night but he wouldn't be charging me the extra $5. The same 2 queen room 4 rooms down. Then my wife used the bathroom (in the 2nd room) and the toilet was leaking. Tried to call the front desk, but the room phone doesn't work. Finally got the toilet fixed (but felt like we were a hassle to them).

Weed smell never went away even the next morning, however my son and his girlfriend on the 2nd floor had a worker stick their nose in their room and accuse them of smoking (wrong floor pal).

Rooms were not bad, but be prepared for a horrible customer service. The nicest person was our shuttle driver to the airport! No coffee on premises, not in room or in lobby.

I DO NOT RECOMMEND THIS HOTEL! Not worth the cheap price
Jaime Tsosie
1 2 3 4 5
This place is a scam. Made reservations and had an additional 100 dollars. Place is under construction but they have no safe. Insulation is in the open and I feel like I have hard to breath with it around
Trina Hardy
1 2 3 4 5
My son is 20 years old and from a very small town. He has never traveled before. His flight was cancelled and had to find a hotel at 1am. He walked to this hotel, was told they did not except his prepaid card and was turned away. only to find out that the charge did go through. When I called the manager and explained to him that there was a charge and that my son was denied a room in the middle of the night he replied very rudely and said it was a cancellation fee non refundable! Are you kidding me???? not only did they send him away he was left with no where to stay in a city 1000 miles away from home and he paid. This place is a joke!!!
hannah beal
1 2 3 4 5
Required to pay an unexpected $100 incidental fee upon check in. Entire second floor under construction. Not clean or welcoming.

Rooms are dimly lit, floors were sticky feeling and one small pillow per person. We were definitely ready to get out of that place.
Joselle House
1 2 3 4 5
I'm already annoyed with this place. I drove 13 hours. I was told by the clerk that I have to wait and addictional 2 hours because I arrived before 3 pm. Beware that there is a $100 incidental fee. The building is under construction so, there will be no restful naps here. The clerk is hardly ever at the front desk. Idk if this is a typical experience at hotels. If so, I'm not impressed. The floors look nice.
Kevin Lewallen
1 2 3 4 5
Cant get an extra pillow. They give you one flat pillow to try and sleep. Kids running and jumping above us all evening. Fire alarm hanging 5 inches from the ceiling. Bed is very uncomfortable. Worst motel I've been in in a while.
James Washington
1 2 3 4 5
I was extremely underwhelmed. From the front desk attendant who was very rude from the start. Also with the building being is such poor shape. The place is dilapidated. It should be shut down. I was in the shower and the floor boards were so weak I honestly thought I was about to fall through the floor. I will advise anyone reading this, spend a few more dollars and get a place that's worthy of your money.
Stacy Bayless
1 2 3 4 5
I checked in for two nights. The whole second floor smelled of weed. I slept for two hours then headed to work. I came back later that evening and smelled it on the elevator and it was even worse on my floor. I tried sleeping but my asthma bothered me so bad that I checked out. There was also someone who tried to come in my room and the door opened but I had the safety latch closed. Yikes! I spent less than 24hrs checked in and 4hrs in the room and was billed for almost $150. Overall the actual accommodations were adequate and seemed clean enough for what I paid. The rooms are small but it works. I didnt get to try breakfast as I wasnt there either day. The two staff members I came in contact with were just ok. I do work in the area and it's not a good area. Make sure to take care when parking (near light and the building). I saw other reviews where people mentioned being sent to occupied rooms so this could be a huge safety issue that I experienced as well. If you need a really cheap room for short stay, this is probably one of the better ones in the area and might work for you depending on your standards. But you definitely get what you pay for. This place has potential but I wont return based on my experience this time.
Janie Mergler
1 2 3 4 5
I'm going to start my review off by saying this hotel is about $50/night. $55 if you choose the airport shuttle service. The man at the front desk was quite short with me but I eventually got checked into a room. The first room reeked of smoke. And if I'm charged a $50 deposit I dont want to be accused of smoking in the room. The second room smelled better but the bathtub didnt drain. We were exhausted at that point. Breakfast was free and pretty basic. The airport shuttle was s good perk though. :)
Steve Galloway
1 2 3 4 5
I was a little surprised to face a demand for a $50 damage deposit when I checked in and then a room inspection at check-out to get my deposit back. You get what you pay for I guess. The room was satisfactory and the hotel was undergoing a refit on its facade, so better thing are to come I suppose. Overall, Microtel does what it says and for the budget minded who don't rely on expense accounts it is a case of "job done".
KaranMark Kroshl
1 2 3 4 5
Room was dirty when we checked in, both trash cans where full of someone else trash. Fire exits where sealed off which is againt fire codes. Room keys kept deactivating while we were still guests. Police officers where always in the parking lot arresting people. Walls where so thin you could hear everything that was happening in the hotel. I will never stay here again and I would not recommend this place to anyone. Wouldn't give a star if that was an option.
cali2nc1luv
1 2 3 4 5
Military man was supposed to fly out but plans changed. Stayed here for one night and the front desk lady of middle eastern descent was EXTREMELY RUDE and acted as if I was bothering her every time I asked a simple question.

Microtel Inn Charlotte Airport is unavailable to book on our website. Search for other parking options available at CLT.

Microtel Inn Charlotte Airport is unavailable to book on our website. Search for other parking options available at CLT.