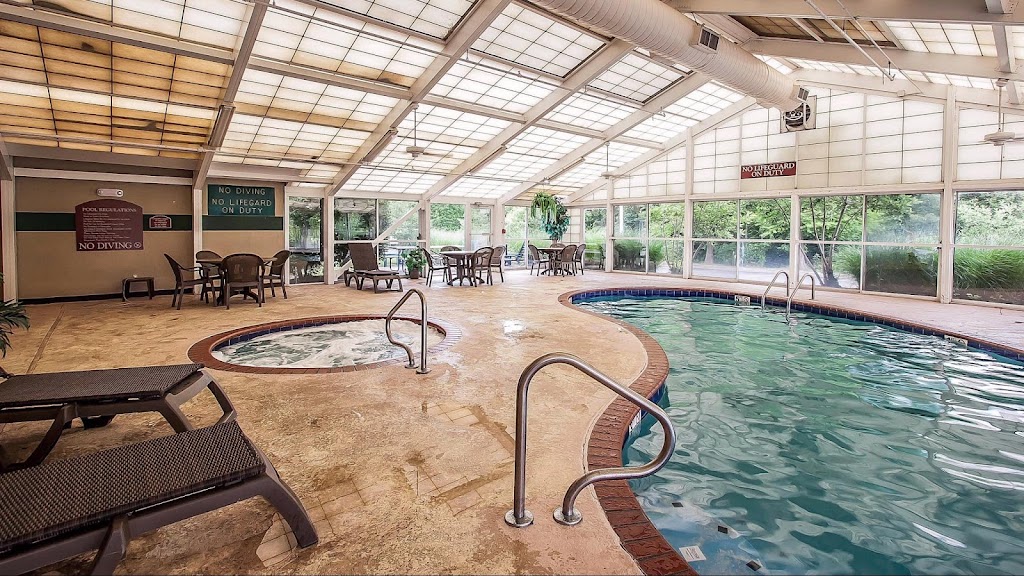 The beds were comfortable and the room was spacious at least. So you can have 1 star instead of 0.
Lakimm25
1 2 3 4 5
I always stay at Choice Hotels and a Choice Hotels Member. This by far has to be the worst experience I have had while staying at any of their hotels. First, we called to reserve a room and was quoted over the phone that a room with 2 queen beds was going to be $79 + tax for the night plus a $20 pet fee because we did have our dog with us. When we got to the hotel, we were then told the price was going to be $119 for the night + tax, plus a $35 pet fee. When we got to the room, it was full size beds, not queens like requested. We couldn't get on the wifi even with the password they provided to us. The beds had clean sheets, but other than that, the room was dirty. I moved the phone on the night stand and there was something sticky all over the night stand. The headboards were wooden, but had something smeared all over them. The bathroom was clean, but there was no water pressure for the shower. The complimentary breakfast was okay, but nothing to brag about. After we starting packing up to leave, I noticed a giant dead cockroach under the desk. We asked for non smoking room which didn't seem to matter since we were put right in the middle of smoking rooms, which people around us were smoking so much weed it was permeating the room we were in to the point that I now have laundry to redo after finishing my 17hr drive. When I went to check out, I had to wait at the front desk for 15 minutes till someone finally showed up. No one knew where the guy that was suppose to be working the front desk was even at. I was so irritated by this point, I just wanted to get out of there. I will never stay at this place again!! Ended up paying $150 for a room that I had to sleep sideways on a full size bed to keep from touching the headboard, keys that didn't work in the doors half the time, and for an okay breakfast.
ShyTheDinoRawr
1 2 3 4 5
The entire first floor smelled like weed, the elevator is barely working and the floor of it is cracking, there is rust and mildew throughout the entire bathroom, the lady at the front desk was rude and looked like she didn't want to be there, there is no sink in the bathroom, and the bathroom wall is cracked. I would reccommend going to a different hotel if staying in Memphis.
Harvey Brown
1 2 3 4 5
Needs a little remodeling. Rooms look a little worn. To be fair I did witness upgrade work in progress. Front desk showed fantastic southern hospitality. Overall I did enjoy my two nights and free breakfast from 6am-9am. The chandelier in the main lobby is beautiful.
S.H LYNN
1 2 3 4 5
BED BUGS!! Don’t stay here I wish I could give this place a NEGATIVE REVIEW WORST HOTEL I HAVE EVER STAYED AT!! First room had bugs all over comforter second room cigarette holes in the comforter bathroom dirty!! Wouldn’t refund me my money the hotel is so bad I’m sitting in my car still terrorized from the bugs third rm still didn’t feel comfortable at this point I will definitely be speaking to management tomorrow this place is DISGUSTING and need to be condemned!! Security was sleep at night in car instead of patrolling I wouldn’t allow my dog to sleep here .
Mark Lyons
1 2 3 4 5
Good service, but dirty halls. Floors and carpeting need to be replaced. The elevator and stairwells are filled with cigarette and marijuana odors. My rooms smoke detector was malfunctioning. On the positive side, the staff is attentive and friendly. My whirlpool jacuzzi suite was clean and acceptable.
Mac Krazie
1 2 3 4 5
The service is absolutely excellent! The suite that I'm in is really spacious, and the breakfast is nice! They have an indoor pool for the guests to utilize, and the staff is always courteous, attentive, and professional to the utmost degree! I highly recommend this hotel to any and everyone who is looking for a pleasant and remarkable place to stay when visiting Memphis!
MaJuana Thompson
1 2 3 4 5
This hotel was very poor, not well maintained AT ALL. The room was filthy, dusty as hell, stains on curtains, on the bedding, found DRIED BLOOD on the white comforter. The TV was not working properly, there is NO SINK in the bathroom... it's in the open area of the room and clogged up with water when you used it. Fridge was not cold at all, yet the freezer was on blast. 🤔

Attendant moved us across the hall to the next room and it was not much better. We literally had to go back into the other room, since we still had the key card, and switch out the comforter. To top it off, the continental "breakfast" was trash. Only thing worth eating was the scrambled eggs. Apple juice dispenser had particles falling out of it into your cup, no oil spray for the waffle maker so, of course, they burned...eventhough though the attendant claimed "you don't need it".

Just horrible all around! Do not stay here!!

Quality Suites I-240 East Airport is unavailable to book on our website. Search for other parking options available at MEM.

Quality Suites I-240 East Airport is unavailable to book on our website. Search for other parking options available at MEM.